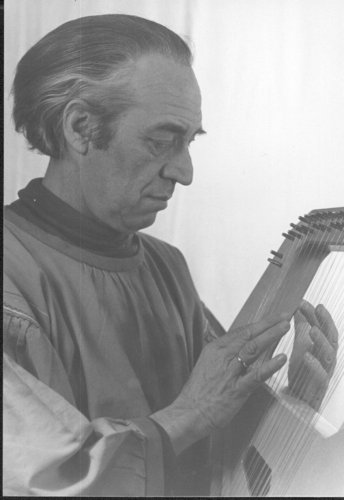 (1919 - 1999) curative educator, musicologist (Dr. phil.) and composer.
From 1939 to 1943 studies of musicology and music in Berlin. 1943 marriage with the musician and curative educator Maja Krueckeberg. After war service and war imprisonment he studied Waldorf pedagogy at the Waldorf teacher seminar in Stuttgart. Starting from 1947 coworker at the Michaelshof Hepsisau, a boarding school for children with special needs. There, over a period of more than five decades, he developped  a multi-faceted musical life. He developped new forms of improvisation for the pupils: Freies Tongespraech (Free talking with tones and sounds), Stroemendes Gestalten (Streaming sculpturing). Also he performed whole operas with the home community. At the center of his pedagogical and therapeutic work is the modern lyre, built by Edmund Pracht and Lothar Gärtner since 1926, to whose methodology he made significant contributions. He was closely connected to the development of the Choroi instruments built since 1964, he played a decisive role in the genesis of the children 's harp, a pentatonic string instrument designed for making music with younger children. In 1970/71 he became a co-founder of the Freie Musik Schule, a training course for art, education and therapy organized throughout Europe. Through his long-term cooperation in various training centers and at numerous national and international conferenences, he had a significant influence on the musical work in Waldorf kindergartens and schools as well as within anthroposophic curative education.

In addition to his contributions to music pedagogical and therapeutic topics, Knierim has mainly published song and choir compositions and music for lyre.